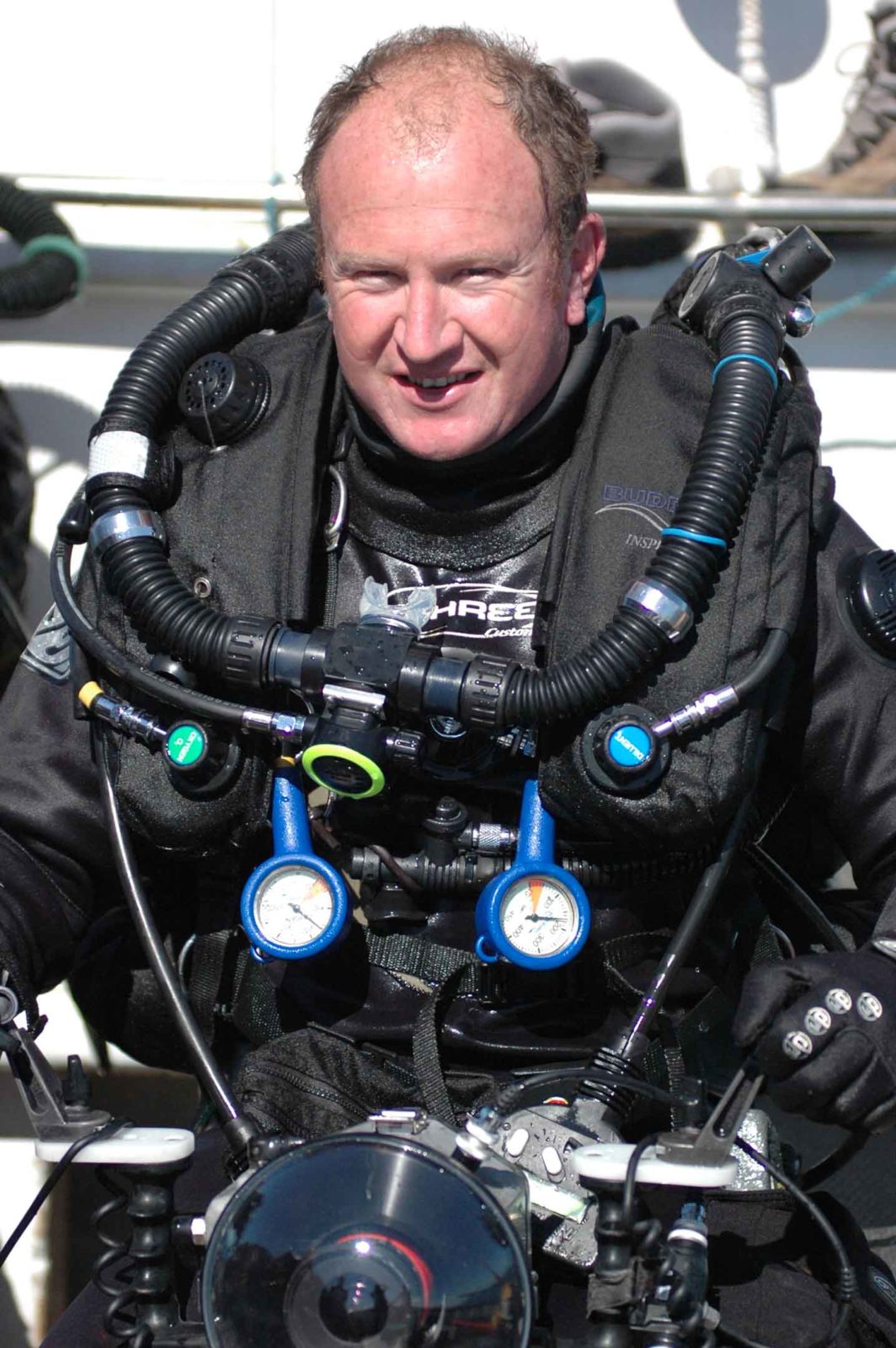 One of the UK’s leading diving adventurers Dan Burton, who had a parallel career in paramotoring, has died in a mid-air collision during the Round Britain Climate Challenge in Scotland.

Burton, 54, from Topsham in Devon, was both support pilot to lead paramotorist Sacha Dench and in-flight cameraman. Their two electrically powered machines collided in the north-west Highlands, near the A498 at Loch Na Gainmhich in Sutherland, on the afternoon of Saturday, 18 September.

Dench, an Australian biologist and climate activist, was being treated in Aberdeen Royal Infirmary for injuries understood to be serious but not life-threatening.

Both were highly experienced pilots and their 3000-mile circumnavigation of Britain was in its final stages. They had already flown a section of the route earlier in the day and had taken off again at about 3.30pm, after which the ground crew lost contact with them.

Emergency services were alerted at 4.45 and police are investigating the crash. The challenge, organised by Devon-based charity Conservation Without Borders to raise awareness of climate change, had begun in June and was put on hold.

Dan Burton, a regular contributor and friend of DIVER magazine for more than 25 years, made his name as a pioneering underwater photographer and film-maker in the 1990s. All aspects of diving interested him but especially the more extreme, and he would become as involved in documenting freediving activities as he was in technical wreck-diving.

Burton came from Exeter, went to school at Grenville College in Bideford and later studied photography for five years at Plymouth College of Art & Design, graduating in 1995 and joining the British Institute of Professional Photography. He continued to attend courses at the college and would later also become a consultant with the marine biology, ocean and environmental departments at Plymouth University.

But he had already set up in business in 1991 as a professional photographer – specialising, as an enthusiastic diver, in the underwater world. At college he had been known as Diver Dan.

His assignments were wide-ranging but always adventurous. He worked on the recovery of $50 million of silver from the 90m-deep El Cazador in the Gulf of Mexico; helped to salvage artefacts from the 1000-year-old Intan wreck in Indonesia; and was part of the first trimix expedition to dive the deep-lying American Civil War ironclad USS Monitor.

He captured images of the 120m-deep HMHS Britannic during Kevin Gurr’s famed 1997 expedition, and said he aimed to take part in at least one major expedition every year. His diving took him all over the world, from the poles to high-altitude diving and exploration of extensive cave systems – many of his exciting trips recorded in the pages of DIVER.

A freediver himself – he was a member of the British freediving team in 1998 – on scuba Burton covered many freediving world-record attempts and competitions, working with Tanya Streeter, Herbert Nitsch, Sara Campbell, Carlos Coste, Fred Buyle and others. Many have paid tribute to a man they recognise as pivotal in promoting the sport.

“It seems to me that Dan didn’t particularly spend much time on land, as he was either under the water or above the clouds… now he’s flying just that little bit higher above those clouds,” commented world-record freediver Stig Avall Severinson.

And Fred Buyle added: “You were the first underwater photographer to be able to capture the essence of freediving – you did so much for the sport with your pictures. Your life has been filled with adventures and passion.”

As he moved further into film and video and added the capacity to shoot from the air, initially using microlights, Burton became a go-to image-maker for TV producers working on marine and other subjects, including the BBC, National Geographic, Discovery Channel and many others. His photographs have been published in hundreds of books and magazines.

“You probably were the first one to take a DSLR under water, that home-made housing for your Nikon D1 – that was a brave move,” said Buyle. Always juggling photographic projects, Burton would design and build his own innovative camera housings as well as drones, and for some years had worked to develop 360-degree cameras.

As his interest in flying grew, he became a director of paramotor importer Fresh Breeze UK, and five years ago accompanied Sacha Dench on a 4500-mile paraglider journey from the Arctic to the UK, following swans’ migration route.

The motto under Burton’s name on his Facebook page was: “One Life Live It!” His most recent DIVER articles included a joyous return to recreational diving in Indonesia after 28 years, and a round-up of the aircraft wrecks he had dived.

“I had dived only six, so far as I could recall,” he wrote. “Not an impressive tally, you might say, yet when I think back I realise that as a photographer they gave me more pleasure to dive than many a steel-hulled shipwreck.

“Perhaps this is because of my long-held parallel interest in aviation, and the fact that I’m an active pilot.” His next article was to have been a round-up of the best British shore dives.

Dan Burton leaves his wife, Caroline, and two teenage children, and Divernet extends its sincere condolences to the family.