Welcome to our world of weird and wacky scuba diving games!

Scuba diving is great fun, but you can get even more out of it by trying some fun scuba diving games.  If there’s a game you’re already a fan of, think of how you might be able to combine it with scuba diving.  You can practice skills you’ve already honed and maybe pick up some new ones besides.

We think we’ve got a pretty good list going here, and there’s something for scuba divers of every level and ability.  We’ve mostly thought about different sports and thought about how they would work completely underwater.  Taking them underwater really adds a whole other level to them, trust us!  And then we applied the same principles to club and party games too! 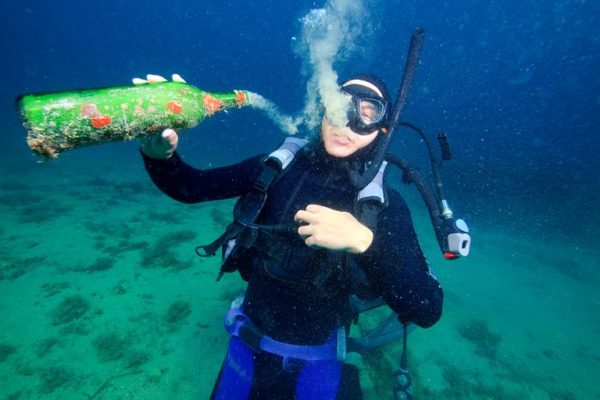 Whether you want to encourage your inner athlete or tickle your inner child, you should find something for you and your fellow divers on our list.

Some of the games require props, so please read this before your trip so you can plan away.

(In the interest of brevity, for this blog post we’re just going to stick with games that are both fun and quick and easy to explain.)

Get ready...let’s dive right in!

Think playing darts is easy?  You may think again if you were to try it underwater!  Not as easy as you might think - super fun though.

And if you really wanted to ramp up the difficulty, instead of throwing the dart from the sea floor, why not try it while hovering and really practice your buoyancy skills!  You could even play with your head down and fins up.

Just be sure not to harm any corals, and maybe play it only where there’s a sandy bottom.

Scavenger hunts generally go down very well.  You just have someone hide various different objects around a dive site, and then either individually or in teams you go trying to find them.  The person or team to find the most objects is then declared the winner/s.

A couple of things to remember with this game - all the hidden objects must be water safe, and you need to make a record of everything was placed so you don’t leave behind any unnatural objects around the dive site. 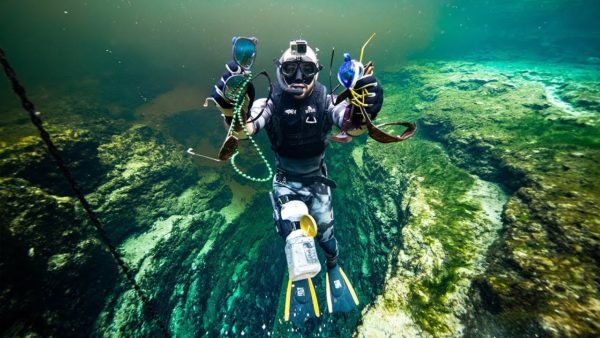 An Egg and Spoon Race

Remember the good old egg and spoon race we all played as kids?  With a couple of minor adjustments you can convert this to an underwater game as well.

Instead of resting an egg on a spoon and trying not to let it fall, you hold the spoon upside down and try not to let the ping pong ball underneath from floating up to the surface!  And if you wanted to make it really interesting you can include it as part of an obstacle course.

Bingo is a great game for a good scuba diving site.  You will need to create (or maybe you could find one online) a bingo card with pictures of all the different things you might see under the water in the area.  They could be pictures of all different kinds of sea life or even personal belongings.

Laminate the bingo cards, and you can take them underwater and see just how much you can spot.  Quickest person or team is the winner.  And to prove you’re not cheating you could take along your underwater camera and snap away.

Underwater hockey is a real thing!  Also known as UWH or Octopush, it came about in England in the 1950s and became a hit world-wide with world championship matches being played every 2 years.

Basically, two teams compete to manoeuvre a puck across the bottom of the water into the opposing team's goal by propelling it with a pusher, which is kind of like a tiny hockey stick.  If you don’t have the exact gear for this sport, you can use makeshift items, or spare scuba gear instead.

Underwater card games are a good little idea if you or one of your fellow divers needs to adjust and be comfortable with being underwater and using their scuba gear before they try more adventurous or more physical games.

You could play any card game you know the rules for, whether it be gin rummy, crazy eights, black jack or even poker!  A good tip for this game would be to try to buy those oversized playing cards you can sometimes get.

For this scuba diving game you’re going to need a salt-water filled ball.  The idea of the game is for your team to get the ball into a basket.  Players aren’t allowed to block the basket by hovering over it, but whoever has the ball can be accosted by members of the opposing team, and have the ball wrestled off them.

Underwater races is a great idea if you haven’t got the time or inclination to prepare a game with props.  If there’s enough of you available you could form teams and make it a relay race.

Our only real advice for this game is to avoid destroying or knocking into any corals, maybe save it for when you have a sandy bottom, or keep it as a game for the pool.

This is a game for more experienced divers.

Many dive sites feature things like buoyancy control hoops, tubes, and similar set-ups to help divers with their buoyancy.  And you could make this set up more fun by treating like an obstacle course, and race each other away.

More experienced divers could up the ante by making certain spots so tight that divers have to take off their BCD & tanks and push it through ahead of them.

When playing this sort of obstacle course race, our advice is to always have one or more divers as referees, who are able to monitor the players, and at the same time function as lifeguards, watching for everyone’s safety.

You may well be pleased to hear that it is possible to play family board games underwater provided that you have sufficiently heavy playing pieces.

As with the underwater card games, this game can help more nervous scuba divers work on being more relaxed underwater, and being more practised in breathing through their scuba gear.

If you have the right pieces you can play all sorts of different board games.  Tic-tac-toe, dominos or even chess.

Frisbee is a great game to play underwater - you can really work on your buoyancy skills!

Don’t feel that you have to use a frisbee - you can use just about anything in its place, just change it to a game of catch.

The best thing about it is that there’s no complicated rules to remember or follow, unless you wanted to add them.  You could decide that whoever drops the frisbee or touches the bottom first loses is the first one out of the game, and when only one person remains they are declared the winner.

Ok, even we can admit that this one is pretty out there.  But why not?

If it’s coming up to the end of October or beginning of November and all the grocery stores are selling pumpkins and pumpkin carving kits, why not put your carving skills to the test and make a spooky jack-o-lantern underwater.

When newbies to scuba diving can demonstrate they can carve a pumping underwater they can sure get bragging rights in our book.

Underwater pumpkin carving is actually pretty popular in North America with many diving groups giving it a go.  There’s even contests amongst some of the groups.

You could really have fun if you lease your inner treasure hunter and try your hand at geocaching for scuba divings.

Geocaching, for those who don’t know, is a treasure hunting game using GPS-enabled devices.  Players navigate to a specific set of GPS coordinates and then attempt to find the treasure (geocache) hidden at that location.

Unfortunately you don’t get any real treasure.  The price is usually a colourful box with some waterproof paper that you can name and date to declare that you’ve found it.

What we love about this game is that it’s suitable for divers of all levels, and can be great fun for everyone who takes part all the way from first time scuba divers all the way through to the more experienced scuba divers.

Geocaching for scuba divers is popular the world over, so it’s quite possible you can find a geocache in a really nice scuba diving spot.

With so many video games being about zombies, black ops missions, car chases and space aliens, you may be forgiven for thinking that they aren’t really any scuba diving video games out there.  But actually, and surprisingly, there are.  There’s even ones dating back to the early 1980s.

The scuba diving video game we love the most right now is ABZU.  It was released back in 2016, so it’s a few years old now, but many scuba divers and ocean lovers really rave about it.  It has visuals that are just stunning, and there are loads of cool puzzles to do too.