Whether you’re an experienced scuba diver or are fairly new to the sport, one thing that may have totally passed you by is the fact that there are very few wetsuits that are available in any other color than black. But why is that exactly?

Below, we’ll discuss this further in depth and explain exactly why black isn’t only the best color for wetsuits but indeed for any kind of garment you’ll be wearing in water for extended periods of time.

One of the reasons wetsuits are black actually dates back to the first days of rubber garment manufacturing. When originally formulated, the color of rubber was a shade of milky-white, but when left untreated rubber was found to be fairly unstable and nowhere near as tough as the rubber we’ve come to know.

So, to add toughness and durability to it, carbon black (or soot) was added to the formulation of rubber as not only did it stabilize the material a lot more, but it was also an inexpensive ingredient and was widely available.

As the carbon black combined with the polymers of the rubber it changed the milky-white color to black and left us with a synthetic rubber known as neoprene, which is what is used in the manufacturing of wetsuits.

Neoprene is able to resist degradation a lot better than natural rubber and is also a lot tougher. The black color of neoprene also helps to improve insulation and will absorb any heat, retaining it for warmth, rather than repelling it as a lighter shade would.

Not only does carbon black improve the insulation and general durability of rubber, it also helps to reduce oxidation and natural aging, so your wetsuit will absorb less oxygen both in and out of the water, whilst the viscoelasticity of the garment rises at the same time.

In turn, this leaves you with a wetsuit that stretches and molds to the contours of your body and allows you to swim and twist in it, without risking creating any weak points in the rubber and ensuring that you’re kept warm and dry throughout your dive.

Rubber that has not had carbon black added to it has been shown to age at a much faster rate, and is also a lot more susceptible to wear and tear under the pressure of water.

In fact, the addition of carbon black into rubber to create neoprene is so effective that even with today’s technological advances and manufacturing of patented fabrics, you’d find it difficult to find a wetsuit that can provide the same level of durability and flexibility.

When you’re wearing a wetsuit you’re going to be exposed to sunlight for longer periods than usual even if the weather isn’t blazingly hot. This is where the carbon black used in the creation of neoprene helps to create a level of UV protection in your wetsuit, absorbing photons from the sun’s rays and the damaging light that comes with them.

Carbon black also helps to keep you protected from UV when you’re underwater and is able to withstand varying water temperatures, along with protection from potentially corrosive salts and minerals found in seawater.

An effect of black being the best color at providing UV protection and absorbing photons is that it is able to retain heat a lot longer than any other color as well. This makes black the best choice for wetsuits as it uses this heat to provide versatile insulation, keeping your body warm as you venture into colder water, and regulating your body temperature when you’re in warmer waters so that you don’t overheat. 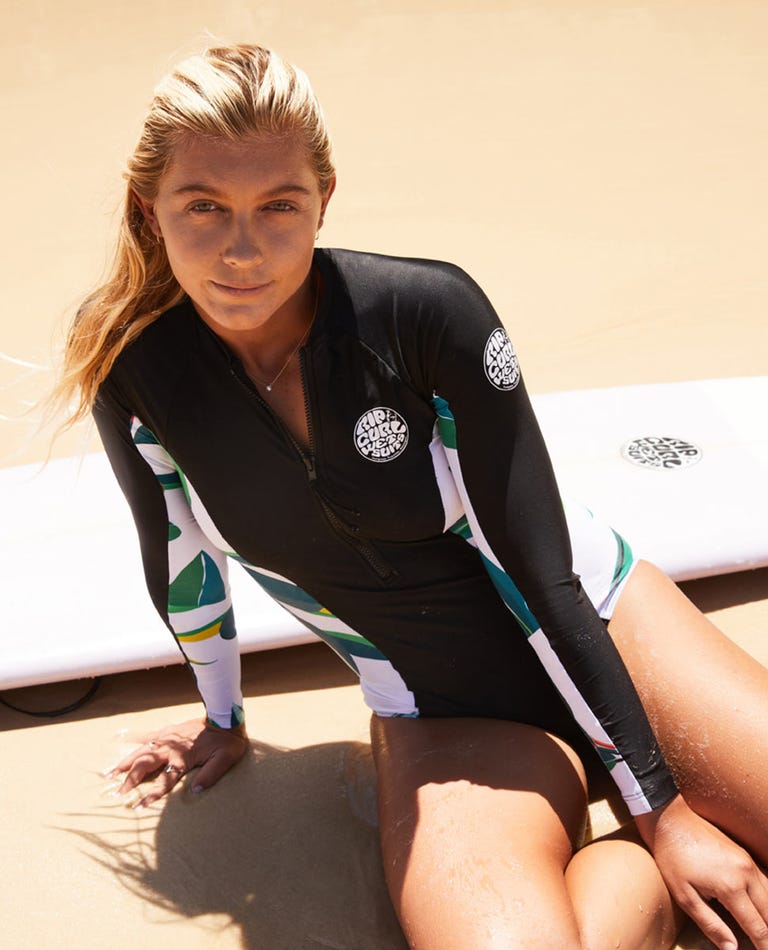 Without carbon black being added to a wetsuit, it simply wouldn’t be able to retain enough warmth provided by the sun to help keep you warm in cold waters.

Alongside it’s heat retentive abilities, the durability of neoprene also makes it an excellent insulator for wetsuits. This strength works in perfect harmony with black to trap water between your skin and the wetsuit and warms one significantly whilst regulating the temperature in another in an almost symbiotic relationship.

With the water trapped between your skin and the wetsuit, you also want all of the warmth you can get, and some wetsuits are also constructed using extra layers of carbon fiber to aid in thermoregulation, however they still contain that magic ingredient of carbon black.

There are a few urban legends and misconceptions regarding black wetsuits, with the most common being that a black wetsuit appears to sharks as a seal. However, this is absolutely not true and there is definitely no heightened risk of a shark attack when wearing a black wetsuit.

If you think about it, a shark will always attack from underneath the water, meaning that any color on the underside of the surface will be darkened against the brightness of the sky. Therefore there isn’t any difference between a bright red wetsuit or a black one - they will both look the same when seen from below.

There is also a similar misconception surrounding yellow wetsuits and shark attacks, with a conspiracy theory being given to the brightness of the color underwater. Again, this is completely false and, as above, yellow wetsuits have no heightened risk of visibility when seen from below.

If you’ve still got your doubts appearing to a shark as food consider as well that a shark uses a finely honed senses to catch their prey, most famously their ability to sense a single drop of blood in the water from over three miles away. With that in mind, it’s highly unlikely a shark will attack you because you look like food.

Alongside being the best color for the benefits it can bring to a wetsuit, there is also a commercial reason behind black being used in their construction. First of all, black is an endlessly versatile color that can be matched with every other color without clashing, meaning that if you’ve got brightly colored flippers or other diving apparel it’ll be guaranteed to match.

In fact, regardless of whatever the garment is, black is always the best selling color right across the board.

People also tend to be drawn towards black if they are unsure on what color they want, and since diving isn’t an activity that requires a particular look, our psychology tells us to go for black.

As you can see there are a variety of reasons why wetsuits are black, and likewise why black wetsuits are the best. The versatility of black makes it a classically stylish option, and whilst there are some other colors available when you’re looking for a wetsuit, it’s highly unlikely that there will ever be a decrease in the popularity of black.

They do, of course, offer you more than just a stylish appearance as well. The heat retentive properties of black mean that you’ll have a wetsuit with amazing insulation, and will also help keep you protected from the sun’s rays no matter the weather. They are also designed to regulate your own body temperature as you move through different waters, warming you up in colder temperatures and preventing you from overheating in warmer waters.

And, to top it all off, the durability of a black wetsuit is unrivalled thanks to the carbon black used in the construction of the neoprene that makes up the fabric. This means that a black wetsuit will be able to deal with varying water pressures, won’t corrode or split when subjected to natural minerals and salts in seawater, and will also mold to the contours of your body for a natural-feeling fit without putting pressure on any classically weaker points.

With all that in mind, black is undoubtedly the best color to look for in a wetsuit or any other apparel intended for use in diving.

Why is neoprene black?

As you will know from our discussion of why wetsuits are black, they are typically made from neoprene, neoprene is a material that has traditionally always been black.

The first days of synthetic rubber manufacturing produced an off-white milky color material. However, this rubber was unstable and did not have the longevity desired.

With this in mind, manufacturers began to add carbon to it. Carbon black is also known as soot and is dark black.

The carbon interacted with the polymers within synthetic rubber to create a new, more stable material. The result was a material called synthetic rubber also known as Neoprene. This was the name given to the material by manufacturer DuPont who invented it in 1930.

Neoprene was a far more resistant, tougher, and longer-lasting material than natural rubber. The black color helped to absorb heat and insulate, hence its suitability for wetsuits.